I’m one of those people that watch a ton of crafting videos on Youtube and think, “this is totally easy!  Why can’t I do it?” However,  I usually get the case of the “lazy” and just sit in front of my TV and glance longingly at my craft stash, wondering why I am not inspired and motivated like those Youtubers.  Don’t get me wrong, I absolutely get inspired and will make a ton of things all at once, but when I am not inspired, I have this guilt trip and am not sure what to really do with that emotion.

In my head, I want to be a cutting edge craft-guru.  At one point in the 80’s, I actually was with rubber stamps.  It was an innocent time, I suppose. Without the internet, I was forced to make do with whatever I could find, and it was fine.  So, now I find myself overwhelmed with so many options and products.  What does all this crap do?  I mean, seriously, there are companies that have so many different types of one solution and to really figure out what the real differences are between products, you need to have loads of time and money to figure it out yourself.  I mean, really?  Who has that sort of resource at the tip of their fingers?  I sure don’t.

I bring this all up because I’m trying to revisit old techniques to make them new again using different modern products.  I think this is where I can actually try to find my voice/style.  As an artist, I realize that everyone has their own sense of style, they make critical decisions within their own mediums that make their work their own.  Personally, I am not sure if I have a distinct style, but I am trying to add techniques to my arsenal of crafty knowledge and hopefully, the style part will come afterwards.

Several months ago, I saw napkins being used for tags in one of my junk journal groups I am in, on Facebook.  They were mostly using glue stick to glue down single part napkins as simple backgrounds. I did this a few times and in general, it was a fairly cool technique.  But I really wanted to do more (and I had a ton of napkins that I needed to use up since I went crazy and bought way too much).  So I started to think about how else to use the napkins.

My mind then moved to paper mache’ that I could use the napkins for…but how to use that on 2-dimensional projects like cards?  I own a lot of different glues (going back to my first comments about all the options and not knowing the differences, etc) at home as well, so I bought about trying to do a paper folding/texture background using the napkin/tissue papers.  So, I cut out papers for the structure, took out my paper (in this case, tissue paper as I had a lot of it) and started to squeeze out the cheap clear glues and went to town.

I picked two different colors for contrast (and matched the Valentine’s Day theme I was working on), cut smaller pieces up and crumpled them in my hands for added texture. I ended up smoothing down and covering the paper base with the glue and then, started layering the tissue paper across the glued areas.  I wasn’t that particular with where the paper laid and I folded and manipulated the paper, hoping it would look fabric like when it dried.  If I used clear gesso or some of my other mixed media glues, I probably could of allowed to paint across these ones, but for now, I just wanted to do a simple background and would add fussy cut images and stickers as embellishments. 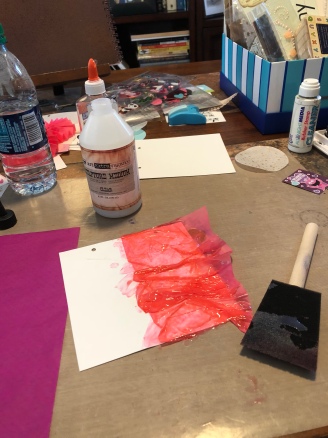 I did test some of the fancier glues as well for some of the bigger cards.  They seemed to work the same way.  Next time I plan on using more and painting over to see what happens.  I left a lot of excess paper along the edges and folder the over as I used the glue to see what it would look like later.  I figured I could always cut them off if it looked horrible. 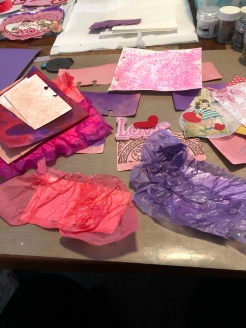 I filled my workspace with all these tissue papered cards.  They took awhile to dry as well (over a day).  When they did dry, they were really firm and still had that tissue paper like texture. 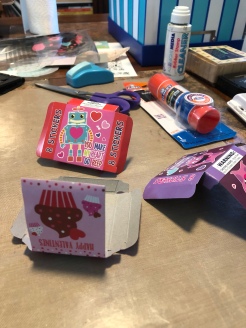 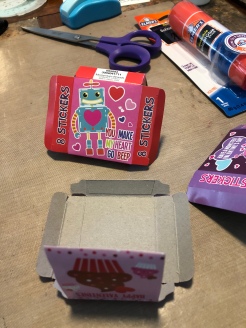 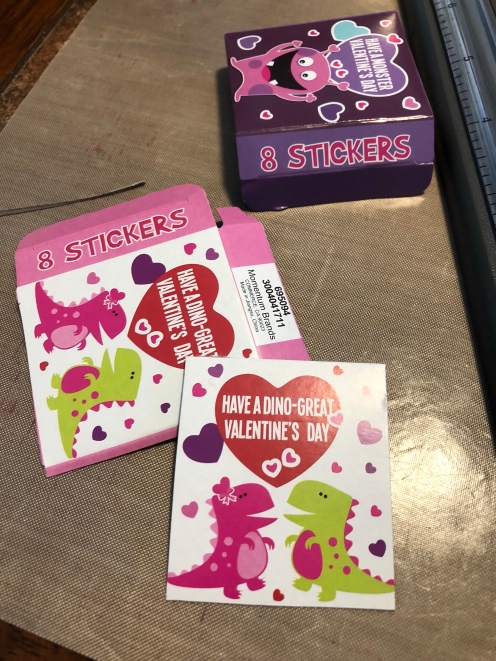 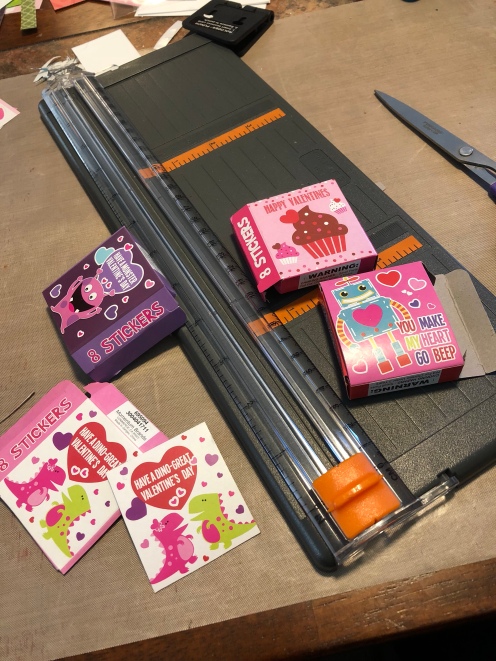 As they were drying, I started on some 99 cent store sticker boxes.  These were for Valentine’s Day and each of these boxes had a set of cute stickers.  I decided I would take them apart and cut out the sentiment sides to use on my various rolodex holiday cards.  It was fairly simple, used my paper cutter and scissors and just removed what I didn’t want.  I also had bought a scrapbook page by Authentique (I believe) which I cut all the images out for all my various rolodex cards. 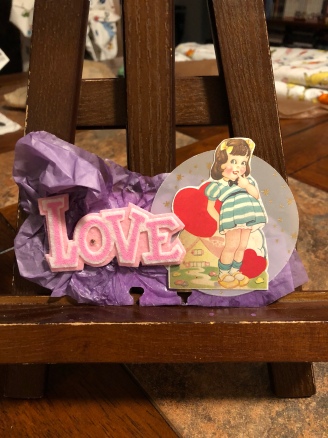 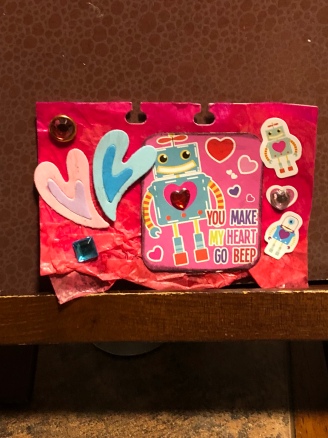 Sticker box, with matching stickers, and some Michael’s embellishments and stickers.

When the background was totally dried, I started assembling the cards.  I’m hoping to come back to this technique and explore it some more with paints and inks.